How To Finally Master the Pull Up 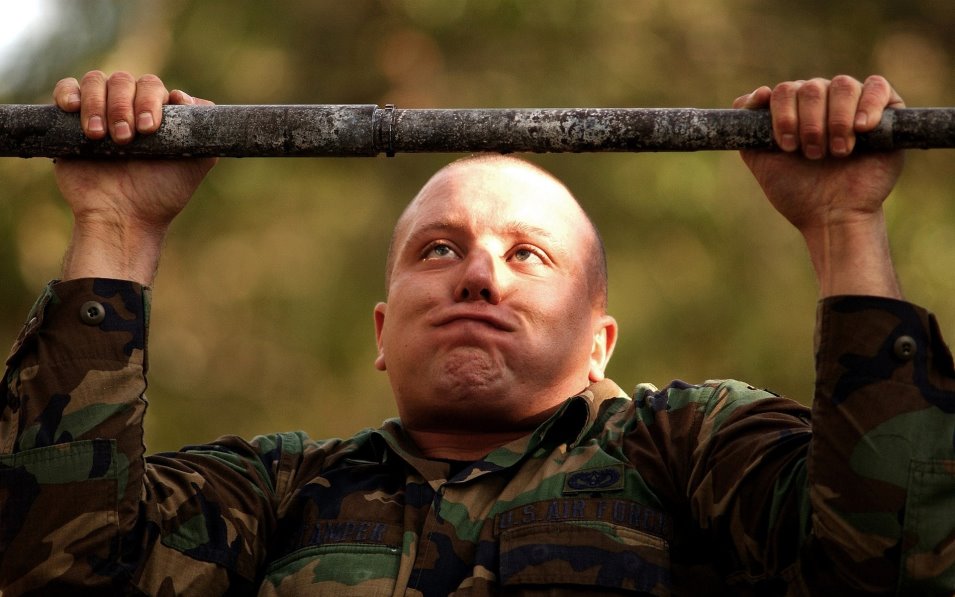 18 Jun How To Finally Master the Pull Up

I always hated the Canada Fitness Challenge. I wasn’t a fit kid. I was never coordinated enough. I couldn’t run worth a damn (still can’t). And the worst part was, I couldn’t lift my own body weight.

Yeah, I went through phases where I was overweight. But that wasn’t the real issue. Even when I was training martial arts, pull ups and chin ups were a nightmare for me. I could never get over about 150 lbs. on a lat pulldown, which I’d always looked at as a sort of pre-training to conquer those dreaded bodyweight exercises; but it just never happened.

It turns out that lat pulldowns don’t really do the trick. The isolation targets the key muscles, but the overall effect of a bodyweight pull up is quite different. It involves an entire framework of muscles from all sorts of directions working in sync.

As an adult, I’ve watched a lot of movies where I’ve thought, “yup…if that was me clinging to that tree branch / cliff face / helicopter runner / bottomless pit ledge of doom, I’d be done for.” That’s not a comforting thought. So I decided to get a pull up bar and work my way up to survival mode.

Am I acing them? Not in the least. I’m getting there though, and my ability to do ten chin ups or pull ups in a row is a testament to my progress. And ten is tough. But three months ago I couldn’t do two. So what’s the deal with these exercises, and why are they such a big deal?

First of all, you have to drop enough body weight yourself to make it to the top of the pull. That’s huge, because if you’re 300 lbs. and most of that is Dorito weight, you’re going to have trouble. To this end, I do suggest undertaking some serious fat burning. This has to be tied in with other exercises that help the framework needed for a good pull up. This means biceps curls, dumbbell pullovers, dumbbell rows, ab compression (crunches are a start), and yes lat pulldowns (if you’re not at a gym, use a resistance band). Chair or bench dips will help your lats as well. Push ups will work your shoulder / back / chest / abs network in a beneficial way too. The real secret is multiple muscle groups rather than isolation.

Once you’re in a place where you think you can begin, you need a bar. If you’re at the gym, great. But if not, you want something like the Iron Gym Total Upper Body Workout Bar

, which allows for the three main hand positions for chin ups and pull ups, and which requires no tools to install. It just hooks over your door frame (and yes, it’s perfectly safe…this is pretty much identical to the one I’ve got on my kitchen door, and it hasn’t come down yet).

The easiest hand position is the neutral grip pull up (palms facing each other). This uses the widest organization of muscles to get you up off the ground. My method was simple: every time I went past the bar, in either direction, I’d do one of these. At first it wasn’t easy, so I started by doing negatives. Grab the bar, hop into the “up” position, and hold it for a ten count, then slowly lower. After about a week, it wasn’t a problem pulling myself into the “up” position once, or even twice.

I continued this until I was able to do three neutral grip pull ups, then repeated the process with a standard chin up (palms facing you). This is a tough one, because it requires a lot of bicep strength. It also emphasizes the chest.

Once this was under control, I moved on to the full pull up (wide grip, palms facing away from you) for the same drill. This is probably the hardest, because it has much less help from the biceps. But this is the one that will get you that toned V-shape by working the lats and the whole upper back. I know a few terrain athletes who only do these three pull up variations plus some push up variations as their upper-body routine, and I have to say you’d think they were spending five days a week in the weight room. It’s a good workout, no mistake.

When you’re able to do five in a row, it’s time to turn them into sets. You can continue doing them as you walk by, but work them into your regular workout routine. Your goal is to hit 10-12 reps for two sets. Then you can start adding weight. If you don’t know what to do with them, try making Mondays for pull ups, Wednesdays for neutral grip pull ups, and Fridays for chin ups. Just remember that your biceps will be conditioned from the last ones, so keep that in mind for scheduling around any other arm workouts.